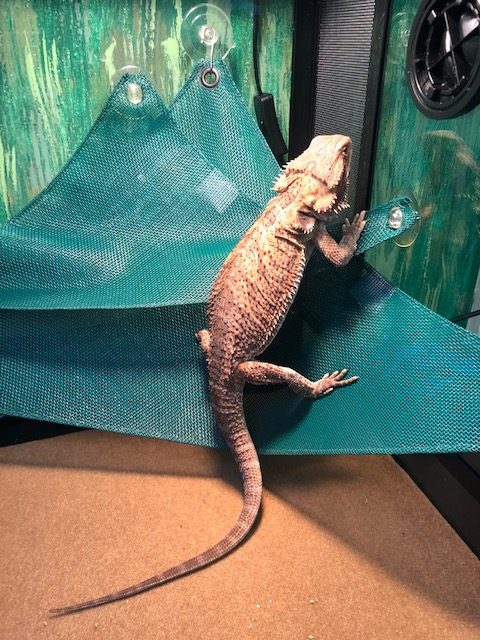 Falcon has made his debut in Lucas' room, and students enjoy having a new addition to the classroom.

“He thought it would be cool to have him in the classroom,” Lucas said, “where he could have some more interaction because he wasn’t getting much interaction at home. So, we thought it would be more fun to have the lizard here and it has been. The students have really responded well to him. They’re very excited, they check him out, they talk to him and I think that’s pretty cool.”

“I love him,” freshman Greta Koenig said, “because he is so cute and likes the sun just like me.”

Lucas has been trying to incorporate Falcor more into her lessons. She has been using him as an example for many of the different thing’s students learn like DNA. But she really has no set plans for teaching any lessons with Falcor specifically.

“I feel great about Falcor being moved into the classroom,” freshman Isabelle Clark said, “We get to see him and enjoy him more.”

Falcor has been eating and drinking normally and is loving bathing in his sunlight. Falcor is mainly fed cricket, bearded dragon prepared food and mealworms.

“He had his first grape a couple of days ago,” Lucas said. “I cut it up into small pieces; he is only supposed to have fruit very rarely. It’s just supposed to be a treat cause it’s all about calcium with him.”

Falcor has been a new addition to the many class pets on campus and is helping Lucas teach her students more about biology in real animals and DNA.